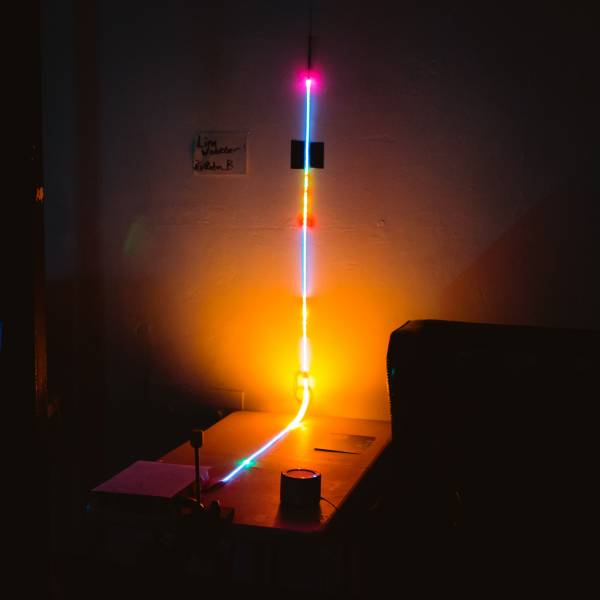 Line Wobbler is a one-dimensional game with a unique wobble controller made out of a door-stopper spring and a several meter long ultrabright LED strip display. The entire game runs on an arduino, including sound, particle effects and 60+fps. Movement is controlled by bending the Wobble controller left and right, while enemies are attacked by flinging the spring. Obstacles such as lava fields, conveyor belts and slopes (which can be modelled according to how the strip is placed in real life) challenge the navigation skills of the player.

Line Wobbler is an experiment in minimalism in game design, use of novel input mechanics, and the incorporation of physical space into the game. The restraint to only one dimension poses a formidable challenge for creating engaging gameplay, artistic direction, and technical realisation.

The flexible LED strip can be (and has been) adapted to wherever it is installed, for example by running the game along the ceiling, up trees or over other architectural features. The audio has been kept simple and reminiscent of old arcade games and compliments the fast gameplay by directly converting the spring movement data into sound.

A portable video game arcade. A pop up virtual kingdom. A suite of local multi-player arcade machines built from cardboard.

Take a sneaky peek behind the doors, into the digital playground of Sago Mini.

Tech Will Save Us

Create sculptures and scenes using dough, then bring them to life with light and sound.

We Are The Rangers

An adventure bringing the fun of Minecraft and United for Wildlife conservation campaign together.